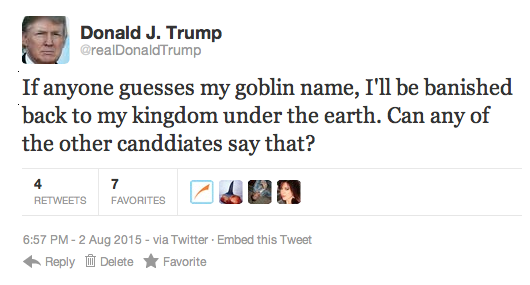 BARTENDER: the usual?
ME: *nods*
*bartender hands me a shot glass full of chocolate chips*

[Cop flashes headlights behind me]

WIFE: I think he wants you to stop

ME: No I think he wants a street race

ME: *taking a corner at 90mph* Guess I was right again, huh Linda

How do you say “I’m sorry I got you pregnant, but my plane leaves in an hour. I might visit the baby one day.” in Korean?

No, Grandma; you can’t pull a Basic Instinct for extra potatoes at the retirement home.

Good thing Father’s Day is only one day. I don’t think I could stand to be a father longer than that.

“David you’re late again!”
“Sorry boss..”
[cut to: me running on all fours through a forest chasing deer]
“…traffic”

“I ate thoup before it wath cool.”

If you don’t take them out enough, they’ll poop on your rug.

SERIOUSLY ASHLEY ON MY RUG??

[in hospital]
son: what happened dad
me: bar fight
son: over what?
me: he said… *clenches fists* he said Zelda is a boy

Me: Don’t text him if he’s ignoring you.