Do you smoke? Smokers: “Yes.” Non-Smokers: “Never have, never will.” Stoners: “Smoke what?” The horror and trauma of explaining homosexuality to a child, as told by an internet mom. 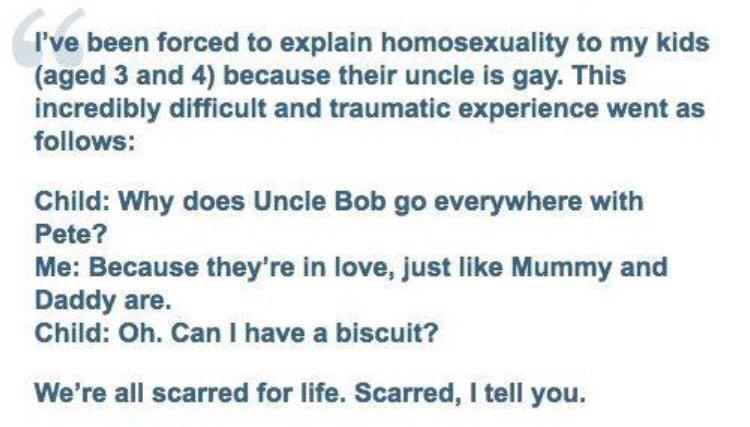 before guns were invented, armies had to throw bullets at each other and if a bullet touched you, you had to sit out until the next war

I told my 3 year-old that sometimes, sharing with his brother is the nice thing to do.

He replied with, “Are you sure about that?” Followed by a maniacal stare.

There is a reason creepy children are used as a theme in horror movies, people.

If a demon ever tried to possess me my first thought would be: enjoy that debilitating anxiety my dude.

MOVIE GUY: I’m not giving up. I’m going to win her affections no matter what!
WORLD: This is romantic and not troubling

Just cleaned out my purse if anyone needs 17 pens or a tooth.

When people’s driving tweets end mid sentence, did the paramedics find their phone and hit send?

I’m smart, but not “I’ll stop talking while I’m still ahead” smart.