My entire life can be summed up by those anxious and awkward breaths; the ones where you wonder if the hiccups are really gone or not.

Sometimes I’ll take such a good picture of someone I’m like “this is definitely making it into the slide show at their funeral.”

Customer Service: “Would you take a minute to fill out this survey?”

Me: “Wouldn’t you rather save that for someone you actually helped?”

You’re allowed to steal shit from the mall. The security guards don’t care. They’re there to shoot the mannequins if they come to life. 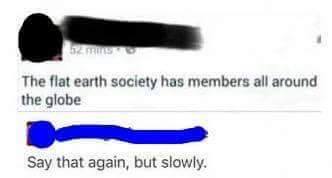 If you get a present from me with scissors and a roll of tape trapped under the wrapping paper, I’m gonna need those back.

[sees wife getting changed after work] you should leave them high heels on
“ohhh yeah?”
[thinking about the spider on the bathroom ceiling] yeah

In the name of “Hell Kitty”, an army of children wages a bloody and unholy war.

“It was just a typo,” sobs Glenn, ex-Tshirt factory worker.

when horses drive past a field of people they say “people”

I just forgot about some nachos in the oven, don’t tell me about your hopes and dreams going up in flames.